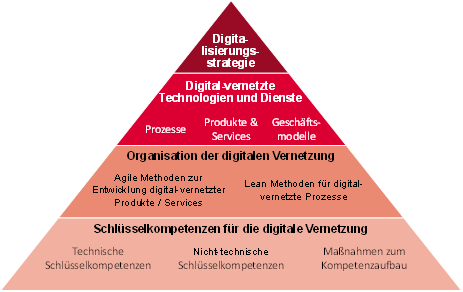 Digital-networked thinking in production – key competences for the industry 4.0

On behalf of the IMPULS-foundation of German Mechanical Engineering Industry Association (Verband Deutscher Maschinen- und Anlagenbau – VDMA), the Institute for Learning and Innovation in Networks (ILIN) at the Karlsruhe University of Applied Sciences and Fraunhofer Institute for system and innovation research ISI analyzed the current state of digital-networked thinking in German engineering companies.

As the study shows, digitalization arrived as a strategic future topic at German machine and plant engineering. One third of 335 online surveyed companies have already a decided digitalization strategy, another fourth wants to establish a digitalization strategy in the next three years. Meanwhile, only in every fifth company, human resources development addresses the challenge of digitalization. Yet, digitalization strategies are more successful if implemented cross-departmental and goals and challenges are communicated transparently. Furthermore, a positive error culture and “courage to fast failure” are important to pragmatically try out things and learn quickly from experiences.

Data-based services or Predictive-Maintenance-Models act as precursor for new business models in the digital-networked world. Although it is shown in this case that such services are offered by only few companies so far. Instead, such technologies are mostly self-developed and there is high dynamic regarding the planned introductions in the next three years. Key competences for the digital networking lie in software-development of modular applications (apps), coding programming software for machine and system control, as well as analysis of complex data and understanding of customer problems.

As digital-networked innovations increasingly take place at the borderline of many various disciplines, interdisciplinary comprehension becomes more and more important. Thus, employees of diverse engineering and IT disciplines should work consequently together on concrete projects to get a better understanding of the different perspectives. A big challenge lies in the setup and extension of essential digitalization competences. Small companies tend to have more problems recruiting appropriate IT and software specialists than large companies. As a result, small companies outsource their software development more frequently. Another strategic option is to spin-off the own IT and software companies for more flexibility, pace of development and appeal to IT-employees. A stupendously large amount (a fifth) of the surveyed companies is already active in this section.

The companies’ willingness to fast experimentation, testing and learning increases in importance. As the study shows, agile and design-oriented development processes can significantly enrich the ability to self-develop digital products and services. As of yet, they are only used by few companies, so there still exists potential. Furthermore, it is shown that there exists a positive coherence between the application of Lean concepts and the companies’ ability to use digital-networked technologies in their own production processes. Lean, well-structured processes after the Lean-principles are therefore an important precondition for a successful technology adaption.

The complete study “Digital-networked thinking in production” can be found on the website of the IMPULS foundation under http://www.impuls-stiftung.de/studien (German).